Brno is the second largest city in Czech Republic and the capital of South Moravian Region. Brno lies between the Bohemian-Moravian forested highlands and the fertile South Moravian lowlands, famous for their vineyards. The city is known for its trade fairs and it is a city of universities, galleries, museum, cafes, clubs and festivals. You can find both historical and modern buildings in the city.

The town was formed around the castle built on Petrov Hill in the 11th century. Another castle was built on Špilberg Hill in the middle of the 13th century. In the late 1300s it became the seat of government in Moravia. Most of the city’s monasteries date from this time. The predominantly Catholic town turned Protestant during the late 16th century and joined the unsuccessful anti-Habsburg rebellion by the Czech Estates. In the following Thirty Years’ War the town successfully defended itself against the Swedes (from 1643 -1645). After the War, it was redeveloped in the Baroque style on a massive scale. With the rise of the Industrial Revolution, Brno became the textile centre of Austria-Hungary. Brno University of Technology was found in 1899 and became a major Czech university. In the 20th century, the city became a centre for trade fairs, with famous exhibition buildings.

Brno has many historical sights and eight monuments are listed among the national cultural heritage of the Czech Republic. The town is dominated by Špiberg Castle on the Špilberg Hill and the Church of St Peter and Paul on Petrov Hill. Špilberg Castle used to be a residence of the Czech kings and always played an important role in the defence of the city. The Cathedral of St Peter and Paul was built during the 14th and 15th centuries to replace an 11th–century chapel.

The majority of the city highlights are located in the centre. George Mendel developed his new science of genetics at the Abbey of Saint Thomas. Other noteworthy churches and monasteries include the St Thomas Church, the Dominican monastery, the Dominican Church of St Michael, the Church of the Assumption of the Virgin Mary and the Church of St James.

Brno has the second largest Ossuary in Europe (after Paris Catacombs). The Labyrinth under Vegetable Market is a system of underground corridors and cellars from the Middle Ages.

Brno also has the largest Jewish cemetery in Moravia and a functionalist Synagogue.

Among many modern and especially functionalist buildings, the Villa Tugendhat stands out as one of the jewels of Brno. It has also been recognized as a World Heritage Site by UNESCO since 2001.  A big attraction for international business visitors is the Brno Exhibition Centre.

In 2013 a new skyscraper in Brno became the tallest building in the Czech Republic – AZ Tower (111m).

The area of the city also includes beautiful parks and gardens. 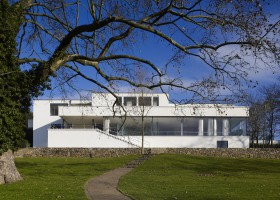