Banská Štiavnica, a town situated in the beautiful natural setting of the Štiavnica Mountains in the central Slovakia, is a fascinating ancient royal town with splendid architecture and historical gold and silver mines. This old mining town used to be famous for its huge production of silver and other precious metals. Many outstanding engineers and scientists visited the town. The mining centre has over time grown into a beautiful town which blends harmoniously into the surrounding landscape. Renaissance palaces, churches more than 500 years old, elegant castles, cosy squares with restaurants and cafes create this town’s great atmosphere.

The historical centre of the town consists of 360 artistic and historical monuments. The most precious and famous monuments include the Old Castle, which combines architecture of all styles from the 13th – 19th centuries,  and New Castle, from the 16th century, which hosts an exhibition on the war with the Turks. Other highlights cover Kammerhof, the largest building complex on the town territory and the former seat of the mining guild and the central administration office for the mines, iron mills and mints in the area of central Slovakia, an open-air mining museum offering underground tours, the Glanzenberg underground gallery. The mining gallery became well-known after it was visited by several sovereigns like Habsburgs in the past and notable personalities in the present. Worthwhile mentioning are also the Knocking Tower, the Holy Trinity Square with its Column of Holy Trinity (built by the town in gratitude for the end of a plague epidemic), and the Rose Street. Also do not forget to visit Baroque Calvary (for more info click here). 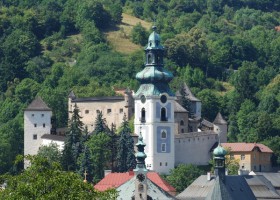 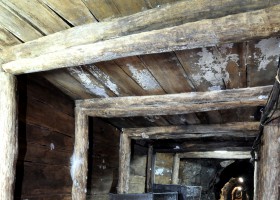