Situated below the Bratislava Castle, on the western side of the historical centre, the 14th century St. Martin’s Cathedral (Dóm sv. Martina) is the city’s largest and one of the oldest gothic churches, and where Queen Maria Theresa was crowned. From 1563 to 1830 it was the  coronation venue of a number of Hungarian and Habsburg monarchs. Instead of a cross, a gold-plated crown is rested on the top of the steeple. It is a replica of the Crown of St. Stephen. The statue of St. Martin of Tours cutting off a corner of his cloak for a beggar is located inside the Cathedral. The statue was carved by Austria’s best-known Baroque sculptor Georg Raphael Donner. The interior houses beautiful huge altars and also catacombs and crypts holding the sepulchres of many significant historical figures. Since 2003, it has hosted the Coronation Feasts, which re-enact the coronation of one of the monarchs crowned in the cathedral. The Cathedral was the co-cathedral of the Archdiocese of Bratislava-Trnava from 1995 to February 2008. 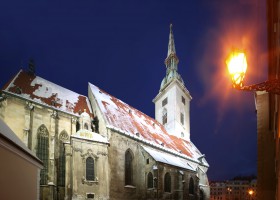